Use the right tool for the Job....

Beautiful Shot sent into us from one of our Happy Customers.  We love receiving happy customer pictures / testimonials.  Keep them coming.
We offer the best of best when it comes to Dry Fly Leaders, Nymphing Leaders and Streamer leaders.
Use the right tool for the job.  You would not use a Screwdriver to bang a nail...   Ok, we have all tried that one at least once, but we can all agree, it does not work so well....

Posted by Unknown at 2:08 PM No comments: 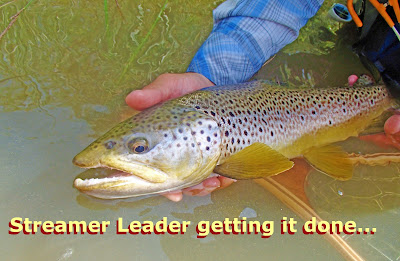 Last week, as a buddy and myself were driving to a local fishery, we were discussing the dry fly action that we have recently been hearing about.  The drive was full of excitement and anticipation.  Our rods were already rigged with dry fly leaders, light tippets and small dry flies.  We did not have all day to fish, so we hoped to hit the ground running....

I was stepping out of my jeep before the it came to complete stop.  To say I was anxious about wetting a line is a severe understatement.  Waders and boots on, we spread apart an opening the bank hugging willows to spy all the rise rings we had so anticipated / expected...

Nothing... Not a rise, not a bug, no surface activity what so ever.  The excitement I previously had, has now vanished.  I have been fishing these waters for years, and the one thing you can typically count on is rising fish.  You may not always catch them, but more often than not, you have targets to go after.

Thinking the hatches were just slow to start, we did some searching with dry flies.  That ended without even a bump.


I decided to give swinging some beadhead nymphs through the riffles for bit.  Again, not a tug or even a nibble.

Because I was so expecting to throw small dry flys all day, I never packed my streamer set-up.  One of the benefits of owning a leader business is I typically have an abundance of leaders to choose from.  I dug through my pack and found a streamer leader for my 5 wt rod.  I attached the streamer leader loop 2 loop.  Tied on a new streamer pattern from a buddy Matty who ties some amazing flies.  We will be offering his streamers very soon.

First cast, was not as far as I needed to to be.   Second cast landed inches from the far bank, I saw the golden flash of a hefty brown turn on my fly.  The game was on.  Being a dry fly guy at heart, I often use light tippets.  Which mean you often need to gently play the fish in order to keep him connected.  Yes, this is half the fun, but when streamer fishing, you can get away with MUCH heavier tippets.  Today I was using 2x.  This means there was no chance this fish was going to snap me off.  Yes, they can still spit the hook, but not worrying about snapping 6x tippet on a big fish is a welcome change.

Below are some of the our best selling leaders. 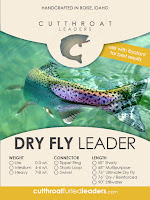 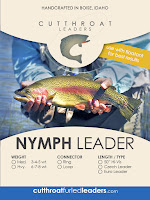 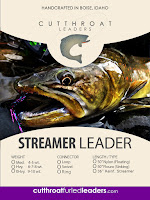 We offer the very finest and the largest selection of furled leaders anywhere.