Proper Mending to get great drifts…

A few trips back, I was out fishing with some buddies.  At one point we were all fishing the same long run.  This type of fishing gave me the opportunity to really watch some great fisherman in action.  We were tossing small pmd’s to rising trout.  We all got to cast three times, and then moved to the back of the line. As mentioned, the run was a long one.  Meaning you really needed to mend the line a couple of times during the drift.  One of the guys fishing with us started the day not using our leaders.  He is a great fisherman and one to be admired.  Not until he watched me and two others using our leaders, did he understand why we all made the switch to thread furled leaders.  The reason one can mend so well with thread furled leaders is because of the micro grooves created by the furling process.  These grooves create impressive stick / grab of the water surface tension.  This “grab” allows the leader to stay put when a mend is put into the line.  The fly-line with its slick coating lifts easy off the water, the leader stays.  The fact that the leaders are also memory free, they create no drag.  The leader is not stiff enough to fight against the currents so it simply succumbs to all of the micro currents and drifts drag free.

It has been a long time sense I really paid attention to nylon tapered leaders and how they perform.  This is one application that a thread leader really shines.   While watching the nylon leader closely, you could see the leader being pulled across the surface of the water when a mend was made.  This means, the tippet and fly have pressure put on them, now creating drag.

The fishing quickly turned from a few guys trying to hook a trout, to a group of guys trying to figure out the pro’s / cons of various leader configurations.  It was great for us “Cutthroat Leaders”, as we had a handful of very experienced fly fishers working (doing R & D) for free….


All in all, it was a great day on the water.  We end ended up with a new Convert to our Leaders and we caught a bunch of fish. 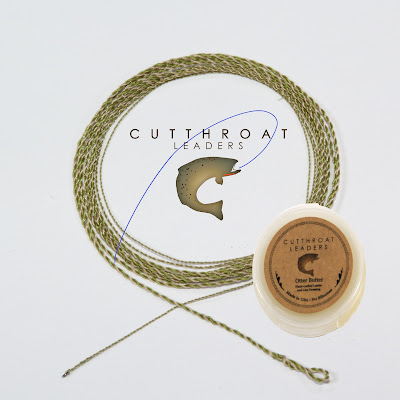