I was lucky enough to be on our local water yesterday.  For a couple of hours, the light was just perfect for sight casting from land.  Slowly walking along the bank looking for Big Hungry trout, getting into position, making that “one” perfect cast and landing a large fish, does it get any better.

This type of fishing has it all.  The bad news, typically, one cast is all you get under these conditions, the good news, the cast’s are “short”, typically less than 30’-0’.  This helps because the river banks are full of brush and tangle causing obstructions.    When a fish is spotted, your first goal is to get into casting position.  Depending on the fish’s, location, this can be more difficult than it sounds.  As noted, you typically have one cast only.  Meaning, you need to go from fly in hand, to a couple of false cast’s, (fly & line in the air only) to dropping the fly in the path you think the fish will travel.  We have all had one of those days that you could do no wrong.  (trust me, I have had plenty of days that I could do no right)….  This day was one of the good ones.  Spot, a fish, sneak into position, make the cast, land the fish, walk 30’-0” down river, do it again…  this was Fun.   I was throwing size 18-20 no hackle BWO.  These no hackle fly’s have become a true favorite of mine.  The fly literally gets better looking with each fish caught.  I did not keep count of how many fish were netted, but it was well above a 20 fish day…  not the norm.   I used only three fly’s all day long.  Two no hackle BWO’s and one streamer for the times fishing slowed down. The reason I so like the no hackle flys is that they are small, lite and have a realistic profile.  There were many times the fly landed right in front of the fishes head…  I mean inches away.  Rather than spook the fish, the fly was simply sucked into the feeding fish’s mouth.   This type of fishing typically requires a longer leader / tippet section.  I was using our 76” Ultimate dry flyleader.  On the shorb  loop end, I had approx. 5’-6’ of 5x tippet.  Then I attached Trout hunter 5.5X Fluoro to the 5x.  This length was approx.-2’-3’ long.  This means my overall leader / tippet length was 13’-15’ long.  The reason this was needed is that these fish were suspended in the top of the water column.  Any surface disturbance would cause the fish to bolt.  (keep in mind I was throwing smaller fly’s).   After hours of spot & stalk fishing, the light changed and the spotting of fish was not as easy.  I got back into the water and simply went back to casting to rising trout…  If you fish enough, you will eventually have one of those days that will be remembered for years to come, this was one of those days.

One of the fish landed was a very old brown.  He was 24” long, but this fish was skinny and it gums were receding to expose big gnarly teeth.  He swam away OK, but I think his end of days is fast approaching. 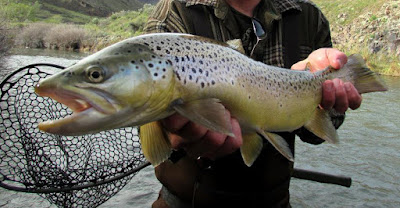 All fish were landed using the Ultimate Dry Fly Leader 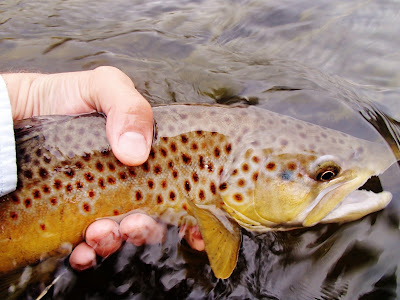 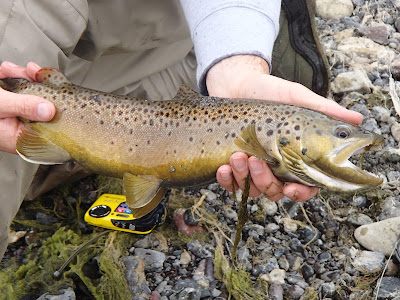