Stripping Caddis...  Sometimes it simply works.
We were lucky enough to catch an hour or so of a great caddis hatch.  Many fish were brought to the net with textbook presentations / drifts  and hook sets.   We were fishing a tailerater that is know for holding selective fish. The was a blast while it was going full steam.   Talk about loads of fun.   Then the hatch slows just as fast as it began.   After yet another long drift down a great looking run, I begin to strip line in getting ready to make another cast.  While I was striping in line bang, big brown hits my caddis. "there hitting skating caddis" I yell.  After a quick release of a healthy brown, I cast again.   This time, I drop the fly in front of a large rock, rather then go for a drag free drift, I lift the rod and skate the fly across the seam.  Two large fish bolt from the depths to attack my fly.  Now this is fun.


Between the two of us, we brought  multiple fish to the net using this skating technique.   We even had a double.   After another 30 minutes of constant action, things begin to slow.  Fish were still rising, although the takes being very subtle.  I tie on a small midge pattern, size 22.  I cast angling upriver and start a slow strip back at me.  Maybe the second cast, fish on.  We have yet another 30 minutes of non-stop action.  This hatch lasted until dark.   As we both crossed the river, climbed the bank, we were still discussing the crazy skating caddis hatch.  It’s always fun to catch a fish on the dry, but a skating dry… that’s just crazy fun.
All Fish were brought to hand using a Cutthroat 76" Ultimate Dry Fly Furled Leader.  I used the shorb loop tippet end, my buddy was using the tippet ring. 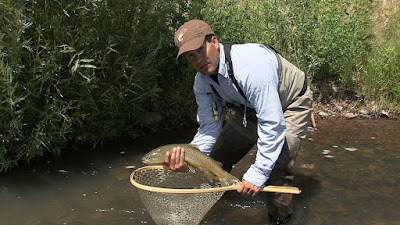 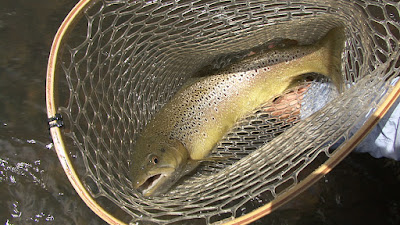